As a developer for a distributed system, I work in a team that relies on the micro-services of other teams. We all beaver away in our separate teams safe in the knowledge that our great communication and nightly system tests will prevent any unforeseen breaking changes…

That was until one Tuesday morning when the peaceful tapping away of developers was shattered by the exclamation of two members of opposite teams who had just realised (that in spite of our frequent cross-team discussions, system tests and shiny Swagger specs!) a change had been merged to one of the APIs that broke our expectations of how it was to be consumed. Without anyone being aware of it, our teams had become apples and oranges!

So what might we have done to prevent such a dystopian scenario?

The problem was that the teams had no way to test the interactions of other services to theirs without either:

One solution to these problems is the Consumer-Driven Contracts pattern, which works on the basis of APIs exemplifying their interactions with one another in ‘contracts’. These contracts can then be exercised against the APIs to quickly highlight breaking changes, without the need to deploy other micro-services.

Whilst developing features for the Website, I want to inform the Image API of the expectations I have towards it, which I can do in contracts. These files simply exemplify the website’s interactions with the API. They are made accessible to the API and communicated to the team working on it.

In my project these contracts live in the Image API’s test resources (image-api/src/test/resources/contracts), although they could just as easily live in a common location.

Now with contracts in place, Spring Cloud Contracts will do the following: 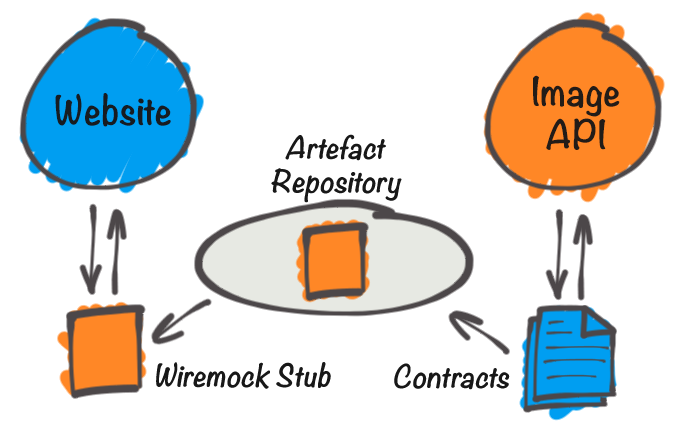 All of this can happen in fast-running tests and without either of the services, depending on the other being stood up. What’s great is the website now has confidence that the API fulfils its expectations, and every time these contracts are tested against the API, an updated stub is automatically produced that can be used by dependent services to stub out the API in tests.

The code below shows the Website using the Image API stub (website/src/test/java/com/drawbydays/website/gallery/GalleryControllerTest.java).