ProGuard is Java class file shrinker, optimizer, obfuscator and preverifier which is baked into Android Studio’s build process. Because it’s part of the build process you have to go out your way to see what it actually does to your code and how it would look to someone trying to reverse engineer your application.

Whilst we could just run ProGuard against a compiled Java class I thought it would be reassuring to recreate the process a miscreant might take to dissemble someone’s APK, and see what ProGuard has done to protect the code.

Enabling ProGuard in a project is done by explicitly setting the minifyEnabled property in your Gradle file to true.

There are many steps to the build process however there are only four that we’re interested in. In order to dissemble the resulting APK we’ll have to reverse each of these processes.

We can see the build process in action by cloning the demonstration project that I created and then calling the assembleRelease gradle task, which will build the release APK without signing it.

Once the ‘assembleRelease’ task has finished then the location of the APK is usually ‘./app/build/outputs/apk/app-release-unsigned.apk’.

Now that we’ve built the APK we can reverse the build process - with the help of some open-source tools - to see what the Java code looks like after ProGuard has done its job.

After dex2jar produces the ‘~/classes.jar’ file you can open it with JD-GUI to decompile the Java code to see what it now looks like post-ProGuard. 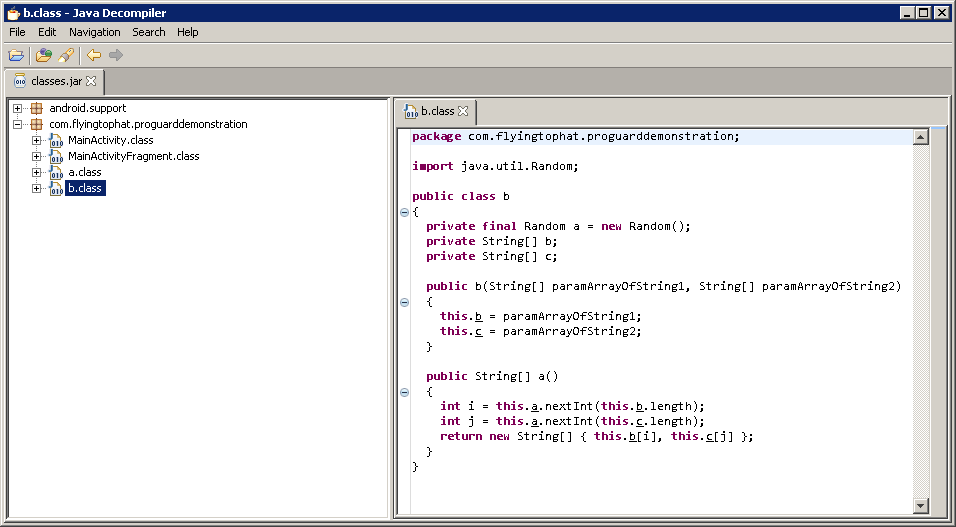 Although this piece of code is quite simple it is easy to see how ProGuard has made it harder to read by using scoped name obfuscation and removing unused methods (in this case the dummyMethod()).